By Nicole McKinney and Ami Goldstein

It’s Black Maternal Health Week (BMHW). This week is a very special week for me, not only as North Carolina Executive Director for Upstream, but as a Black mother, and a member of the North Carolina Institute of Medicine (NCIOM) Maternal Task Force, where improving health statistics for mothers is at the heart of their work.

Coming into #BMHW21, I’m thrilled to see the announcement of the NC Momnibus Act from legislators in the North Carolina General Assembly. The bill focuses on improving maternal health and treatment for Black women. While all women across the state are dealing with horrific maternal and infant health statistics, Black women in North Carolina are two times more likely to die from complications in pregnancy. The pandemic has only exacerbated this risk with the reduction in transportation options, lack of support from doulas due to hospital rules to lower COVID-19 transmission, and lack of access to caregivers.

These issues are not new, but the pandemic has highlighted how devastating these problems are and the disproportionate impact on Black women. In order to have a positive impact on them, we must have a firm understanding of the history of why. I’m honored to co-write this post with Ami Goldstein, CNM, FNP about one piece of this history that still plays an important role in the care of Black women today.

The health disparities for women and infants of color are clear. In addition to Black perinatal deaths being higher than those of white women, there are areas of North Carolina with limited or no access to maternal care:

All of these barriers create tremendous problems for mothers getting adequate healthcare from preconception to postpartum. 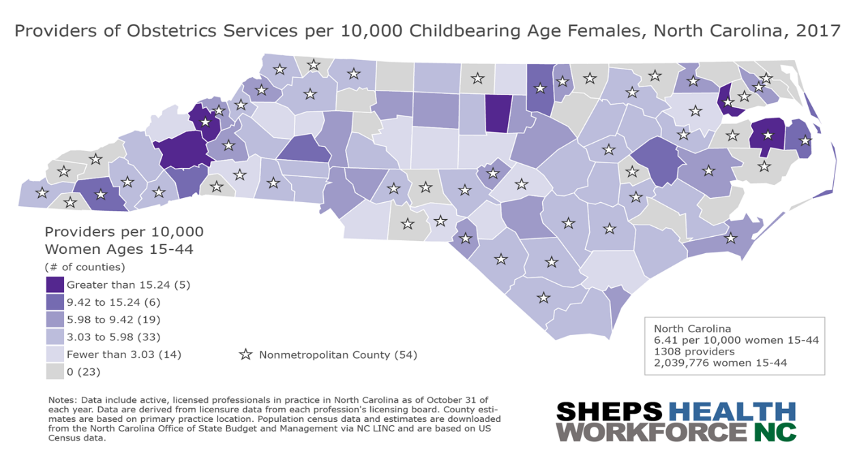 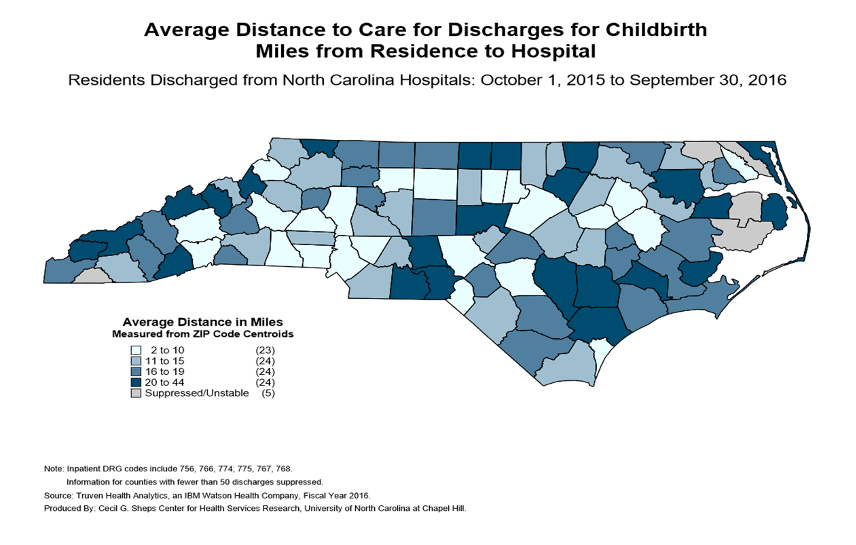 The effects of regulation

The Sheppard-Towner Act funded the establishment of the North Carolina Bureau of Maternity and Infancy in 1922. These were public health measures that addressed maternal and infant health issues and included, but were not limited to:

While licensure and accountability for any profession are important, these measures became a process to eliminate midwives in North Carolina.

By requiring birth registration and completion of birth certificates, midwives who were unable to read were forced out of a profession. The lack of access to education was not a consideration in the inability to read, nor was it recognized as a problem to be addressed. Nurse-midwives were suggested as a solution to the problem, but only because they were under the control of the obstetricians and public health department. 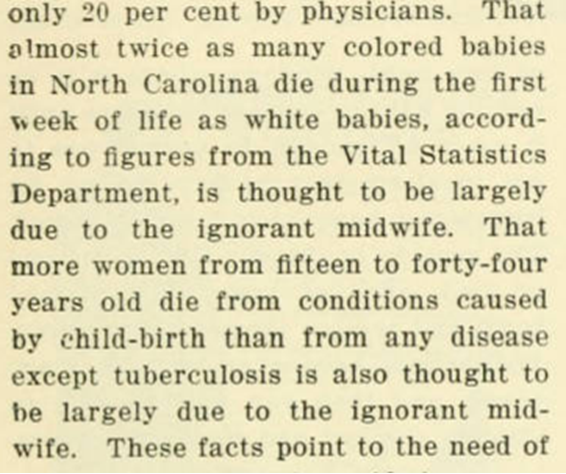 In addition, the NC Health Bulletin, the Board of Public Health’s publication, frequently blamed midwives for outcomes caused by economic and racial disparities, and constantly called for the “control” of midwives.

The cause of health disparities between races was placed completely in the hands of the midwife. Living conditions, food and housing insecurities, lack of plumbing and safe water, and racism were not considered contributing factors. All blame was placed on these community healers rather than an acknowledgment that they worked in challenging conditions.

As the years went on, the county health departments attempted to recruit new midwives to train. In the past, potential apprentice midwives were identified and trained by experienced midwives. However, the county health departments failed to involve the community midwives. Over time there were fewer and fewer midwives across the state until the late 1970s and early ‘80s saw the last of these midwives retire. 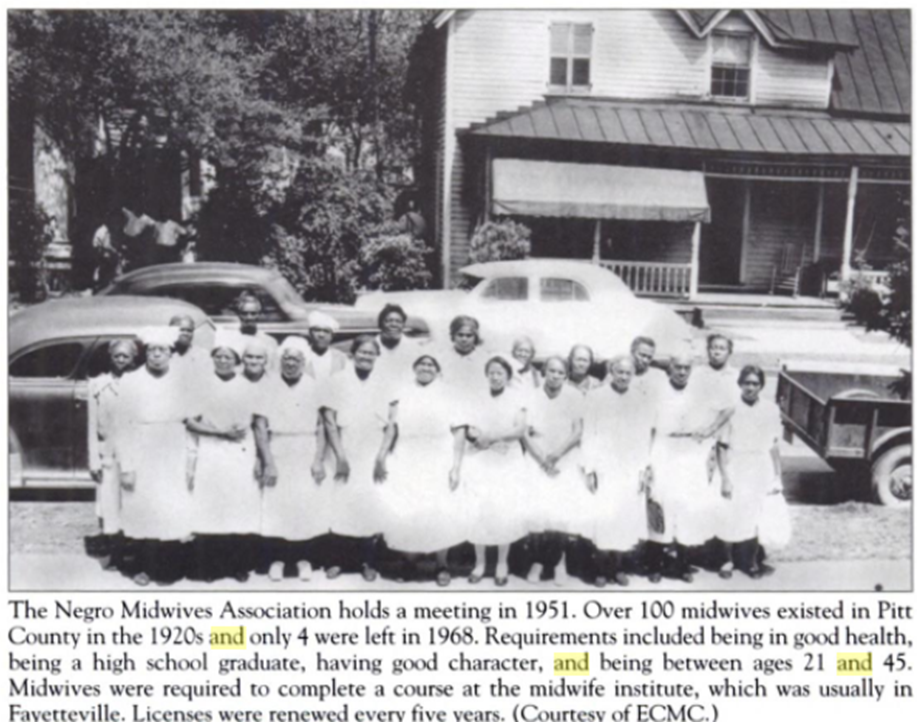 How the Past Connects to the Now

The March of Dimes has three designations for maternity care access in counties. A county is a maternity care desert if no hospitals are providing obstetric care, no birth centers, no OB/Gyn, and no certified nurse-midwives. A county is considered low access to care if there are one or fewer hospitals offering Obstetrical services. So how does this connect to the issues we face today?

As stated earlier, North Carolina has 18 counties that are designated maternity deserts, and 20 counties that have low access to care. These 38 counties are where many of the midwives of the past were pushed out.

NC Momnibus Bill and the Future of Maternity Care

Midwives are an integral part of ensuring that women receive the care they need. Research shows that women who have midwives as their providers experience “significantly lower rates of cesarean, preterm birth, low birth weight infants, and neonatal death.” We owe it to mothers in the communities to provide them with options and top-of-the-line care.

The NC Momnibus Act addresses many of the systemic issues mentioned in this blog series. You can read the bill in its entirety here.

Follow us on Twitter and LinkedIn, and join us in amplifying the voices of the Black Mamas Matter Alliance for Black Maternal Health Week (#BMHW21).

This is the second post in our Maternal Mortality Series. Our first blog covers the testimony Upstream gave to the U.S. Commission on Civil Rights. The testimony, and the blog, highlights our mission is to ensure that all patients have equitable access to the birth control of their choice which has a hand in maternal mortality.

Ami Goldstein, MSN, is a Nurse-Midwife and Family Nurse Practitioner at UNC Chapel Hill School of Medicine. Her focus is on family-centered care and supporting people to make healthcare decisions that are appropriate for them.

Nicole McKinney, PHD, LPC is Upstream’s Executive Director in North Carolina, leading a state-wide project to reduce unplanned pregnancies within the state by delivering patient-centered, evidence-based training and technical assistance that eliminates barriers to offering the full range of contraception.